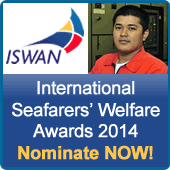 The International Seafarers' Welfare Awards 2014 have just been launched. For seafarers, the backbone of the industry, welfare services and facilities can be a life line when working away from home for long periods of time.

These awards recognise excellence in the provision of welfare services by shipping companies, welfare organisations, ports and individuals – on ship and on shore. They showcase good practice in the industry, and highlight the commitment and dedication shown by many – in the service to seafarers.

With nominations now open, we encourage seafarers to recognise those that have shown them exceptional service this year. The award categories are: Seafarers' Centre of the Year; Shipping Company of the Year; Port of the Year; and Welfare Personality of the Year.

The winners of the 2012/2013 International Seafarers Welfare awards were :

Roger Harris, Executive Director, International Seafarers' Welfare and Assistance Network said "Seafarers make a huge, often invisible, contribution to our societies. They deserve to have excellent welfare services and facilities wherever they are in the world. These awards recognise the considerable efforts that organisations and individuals make to meet the welfare needs of seafarers, and we hope that others are inspired to do more in this area."

Visit www.seafarerswelfareawards.org to find out more and to make a nomination.

Further information is available from awards@iswan.org.uk