SeafarerHelp Assisted Over 4300 Seafarers & Their Families in 2012 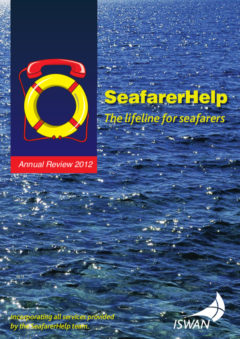 SeafarerHelp is the free 24 hour multilingual helpline for seafarers run by the International Seafarers' Welfare Assistance Network (ISWAN). ISWAN have just produced the 2012 Annual Review for SeafarerHelp. During 2012 the SeafarerHelp team dealt with problems involving over 4,300 seafarers and their families. There was a 30% increase in the number of new cases handled by the SeafarerHelp team and an increase of 43% in the number of seafarers assisted compared to the previous year. The most common problems seafarers faced were upaid wages, problems with repatriation, contractual problems, sub-standard conditions on board and health issues.

Roger Harris, Executive Director of ISWAN, said "The SeafarerHelp team did a great job in 2012 working around the clock everyday of the year assisting seafarers. We wish to thank our funders and other supporters for helping to provide this vital lifeline for seafarers all over the world."

One case where SeafarerHelp provided assistance involved forty Filipino crew, who had not been paid, on two ships owned by the same company. Both ships had been arrested and were at anchorage for more than two months. SeafarerHelp put the crew in touch with the local ITF representative and local welfare organisations. While waiting for the ships to be sold, the SeafarerHelp team maintained regular contact between the seafarers and the various organisations involved. After three months the crew were paid and repatriated.

The Annual Review can be downloaded below along with a poster advertising SeafarerHelp. For more posters & cards promoting SeafarerHelp email iswan@iswan.org.uk.

Seafarers can contact SeafarerHelp 24 hours, 365 days per year in the following ways: