It caused a storm surge – a wall of water – that was 25 feet high in some areas, including in the town of Tacloban.

Reports regarding Haiyan's windspeeds vary but the Philippine Atmospheric, Geophysical and Astronomical Services Administration – the relevant government authority - has said that when it made landfall Haiyan had sustained winds of 147mph and gusts of 171mph.

If the figures are correct then Haiyan WAS NOT the strongest tropical storm to ever make landfall but it WAS the deadliest Typhoon in the history of the Philippines, a country hit on average by more than 20 tropical storms a year and prone to both earthquakes and volcanoes.

Over 14 million people were affected across 46 provinces.

The city of Tacloban, home to more than 220,000 people, suffered more loss of life than any other area of the Philippines.

The Government of the Philippines said the storm resulted in over 6,201 deaths with over 1,785 people reported missing.

Behind the figures there are tens of thousands of individual human stories of people losing children, parents, and loved ones in the most appalling of circumstances.

When news started to come through about the devastation caused, the maritime industry was quick to respond.

Companies, both shipping and ship management, began to mobilise their resources. One initial response was to find out more information from the affected areas and to set up helplines for seafarers who were away at sea. Companies began compiling lists of seafarers who lived in the areas hit by the typhoon. Some crewing agencies began to send their staff from Manila to find out if their seafarers were safe, injured or missing.

Outside of the country there was a real need for seafarers to call back home to find out if their family and loved ones were safe. ISWAN helped to organise an appeal with the help of Intermanager, ICS and others. Very soon we had enough funds to distribute to seafarer centres all over the world for free calls for Filipino seafarers.

Shipping companies and others also began to provide free phone calls and internet services for seafarers. 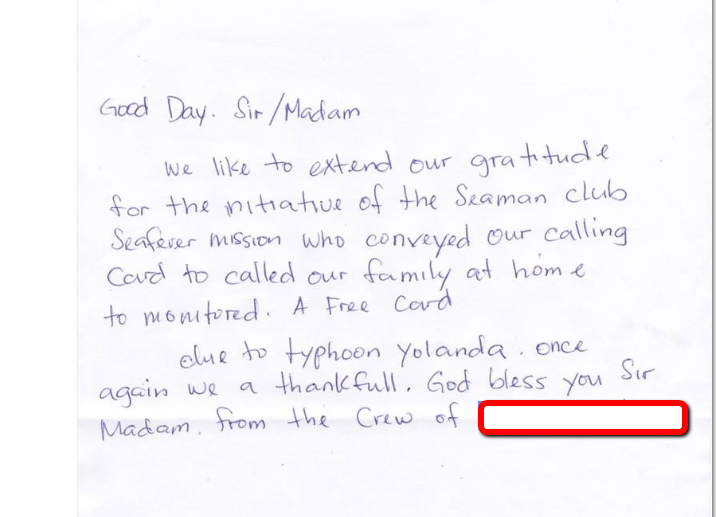 After a few days it soon became clear that the typhoon had caused widespread devastation resulting in many casualties and the destruction of homes, schools, hospitals and businesses. Maritime Companies, unions, and welfare organisations started to organise relief efforts when the full extent of the effects of the Typhoon were known.

There is a job to be done to pull together the full information about how companies, unions, and other organisations responded and what they did – and are still doing – to assist those affected by the typhoon.

Many companies organised fundraising and donated to funds to relief organisations, such as the Philippines Red Cross working in the affected areas. Others used the funds raised to directly assist their seafarers with financial and material support. Some companies funded the re-building of homes, schools, and hospitals.

The ICS also donated funds as well as helping to co-ordinate help and assistance. Intermanager galvanised its members and other to assist and sought out donations for maritime associated companies.

As well as funds companies assisted in moving relief supplies to the affected areas as well as providing personnel. Companies also assisted training schools that had been damaged and helped cadets whose families had been injured or killed. Many companies raised hundreds of thousands of US$.

Maritime trade unions also responded. AMOSUP's training ship the Felix Oca, was used in conjunction with the Norwegian shipowners was used to deliver relief supplies. The ITF Seafarers Trust donated US$160,000 to PSU and AMOSUP. Both unions over the following months carried out relief and reconstruction work and continue to do so. AMOSUP for instance sent medical teams to Cebu to assist as well as conducting assessments for longer term relief & reconstruction.

Welfare organisations such as Stella Maris, Mission to Seafarers, and Sailors Society also quickly responded to the typhoon. As well as providing free phone calls for seafarers back home the welfare organisations also provided emotional and pastoral support to seafarers in foreign ports who were anxious about their families back home.

So while a lot has happened over the past year more still needs to be done.

Many seafarer families lost their livelihoods so there is a need to help these families get back on their feet by providing training and small loans.

Reconstruction continues. Many more new homes need to be built to replace those destroyed by the typhoon. While many homes have been completed many more are needed. And they need to be built faster. I realise that there are many complexities involved including logistic problems and issues around land ownership but families are still living in temporary and makeshift housing.

Funds raised for reconstruction need to reach the communities for where it is intended. More needs to be done to ensure that there is closer scrutiny so corruption and profiteering is minimised. Local politics should not get in the way of reconstruction efforts.

There are many lessons to be learnt from the maritime industry's response :

Let's not forget – the cameras have gone away but the challenge to rebuild lives still remains.