On 19th November 2015, ISWAN hosted a Tweet Chat in order to discuss the social isolation of seafarers. A Tweet Chat is an event held on Twitter, where various individuals participate in a discussion topic at a designated time, the tweets are then grouped by a shared hashtag.

The discussion followed on from the publication of Dr.Olivia Swift's article, Social Isolation of Seafarers, available for download here. In hosting the Tweet Chat, ISWAN aimed to put the issue of social isolation under the spotlight, as well as to give people in the industry an opportunity to raise thoughts or questions that the article may have provoked. In bringing various stakeholders together on social media, ISWAN hoped to highlight various means of alleviating isolation.

Questions posed during the discussion were:

The participants discussed the changing face of social isolation, underlining the role of increased Internet access. Whether access on board can be a factor helping to alleviate or aggravate social isolation on board was deliberated. Some participants believed access can increase seclusion by encouraging seafarers to remain in their cabins, but others pointed out that Internet access can offer shared topics of conversation, as well as providing social activities such as gaming or shared film viewing. One solution to this debate has been mooted: limiting Wi-Fi access to common areas, rather than cabins. However, this raises the issue of privacy, with participants asking whether other professions limit private Internet access in this way.

This year's Crew Connectivity report by Futurenautics report shows that only 40% of survey respondents had access to Internet on board. Participants asked how seafarers can rely on Wi-Fi in port or in seafarer centres with faster turnaround times, and seafarers spending increasingly less time in port.

When asked whether there are aspects of life on board limiting socialisation, the decreasing size of crews was noted, as well as the mixture of nationalities and languages on board, cultural and linguistic barriers limiting conversations between crew.

When it came to discussing actions currently being taken against social isolation, participating organisations pointed out their role. Apostleship of the Sea, Mission to Seafarers, and Seafarers' Friend (Boston) cited ship visits, free Wi-Fi in seafarer centres and bringing games and puzzles on board as methods of bringing crew together and of easing isolation. However, the question of the future of seafarer centres was raised.

Various ideas for lessening social isolation were broached. Having a more balanced mix of men and women was proposed, so female seafarers could feel less isolated in a male-dominated environment. Various initiatives such as encouraging the crew to eat together, or to participate in 'film nights' were suggested, but it was agreed that the role of the Master was tantamount in putting these ideas into practise. It was also underlined that, while welfare organisations can do much to help, shipping companies also have a large role to play in this field.

The future of this issue was also discussed. On the one hand, the increase in automation, and therefore decrease in crew sizes, suggests that the state of social isolation among seafarers is set to worsen. On the other hand, there is an increasing awareness of mental health issues and less stigmatism in seeking help. In both scenarios, participants agreed that future crew retention also hinges on the ability to provide feasible Internet access.

Many ideas were raised during the discussion, with the potential to meet in person to discuss these topics further. ISWAN wishes to keep social isolation high on the agenda for welfare organisations.

A summary of the tweets can be found here.

If you have any questions arising from the discussion, please contact Caitlin Vaughan, ISWAN Project Manager at caitlin.vaughan@iswan.org.uk 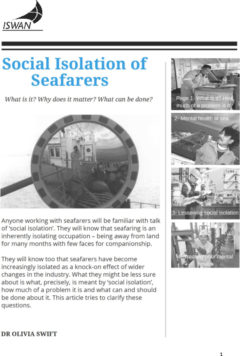