February 03, 2016
Welfare boards, known locally as Port Welfare Committees (PWCs), help form maritime communities that coordinate, review and support improvements to the provision of shore based welfare facilities and services for seafarers.
An ISWAN pilot project funded by the ITF Seafarers' Trust, the International Port Welfare Partnership (IPWP), aims to encourage and support the establishment of Welfare Boards worldwide. With seafarers' welfare and wellbeing assuming greater importance, Welfare Boards encourage the maritime community to work in partnership with one another to ensure that seafarers' welfare in ports is properly supported. The value of Welfare Boards as effective welfare forums has long been acknowledged by the international maritime community, including the International Labour Organisation. Access to shore-based welfare facilities is now recognised by the Maritime Labour Convention (MLC, 2006) as a key component in securing seafarers' rights and freedoms.
Administered by the Merchant Navy Welfare Board, the International Port Welfare Partnership (IPWP) pilot project aims to establish welfare boards, in accordance with MLC, 2006, at national, regional and local port level.
Prior to the visit to West Africa the Partnership helped set up welfare boards in Australia (Gladstone & Brisbane), Antigua & Barbuda (St Johns), Republic of Korea (Busan), Canada (Ontario Region), Spain (Barcelona) and conducted a welfare review of seafarers' welfare in Mauritius (Port Louis). These PWCs now make a valuable contribution to seafarers' welfare from the Pacific to the Caribbean.
Following a trip to West Africa in January 2016, two new Port Welfare Committees were successfully established in Ghana and Benin. The establishment of the PWCs in Tema (Ghana) and Cotonou (Benin) marks a significant moment in the development of welfare facilities for seafarers operating out of the regions' expanding ports.
At the inaugural PWC meeting of the Tema PWC the Hon. Joyce Mogtari, Ghana Deputy Minister for Transport stated "The formation of this committee will enhance the provision of appropriate facilities and, of course, the services that are provided at ports and keep up with modern trends and best practices in seafarers' welfare."
Speaking at the re-opening ceremony of the Stella Maris Seafarers' Centre in Cotonou, General Manager of the Port of Cotonou, Naomi Azria congratulated the port community and Apostleship of the Sea (AOS) for forming the new PWC and improving seafarers' welfare. The centre has now been refurbished, following military occupation, with local funds by Stella Maris.
With new supply routes opened up, helping to connect landlocked countries in the region, major ports in the West Africa Sub Region are expected to experience a marked increase in port traffic in the years to come. In a region that experiences piracy, kidnapping and armed robbery the busy ports of Tema and Cotonou also offer safe anchorages that are used by thousands of ships in transit. The Partnerships success in the region not only demonstrates the significance local stakeholders place on PWCs, but also highlights the importance of the support and expertise that can be provided by outside organisations such as ISWAN, the Seafarers' Trust, and MNWB.

If you are interested in joining the ISWAN IPWP project, should it expand into a major project in the future, then please contact here. 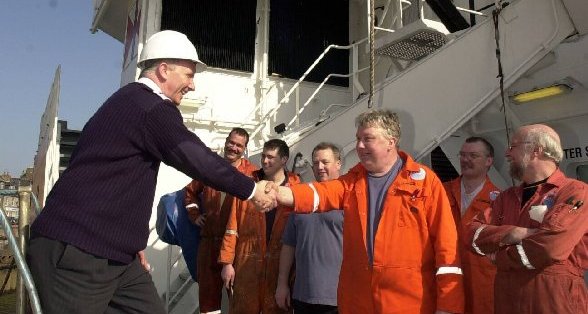