On a hot, grey muggy day, three members of ISWAN were on our way to visit Port of Tilbury, London's main port. The aim of the visit was to meet the port staff and to understand their role as well as to speak to seafarers about their working conditions and their experiences. This port visit was one of a programme of such visits undertaken by the ISWAN team as part of their comprehensive training programme.
We were picked up from Tilbury station by Tim, Deputy Harbour master. Although close to the station the Port is not easily accessible by foot. It also made getting through security easier because we had a member of port staff with us.
After going through the security procedure, we were dropped off at Harbour Master Geoff's office, ready for our day.

Geoff is a former seafarer, who shows a clear love of his port and the people in it, whether permanent workers or transient arrivals from the sea. He talks with great enthusiasm about ensuring seafarers who enter his port are well treated, and is justifiably proud of Tilbury, both in terms of its economics and its organisation. He drove us on tour, pointing out sites such as the garden outside the office which is maintained by former seafarers for others to use, the wind turbines that provide 50% of the electricity that Tilbury needs and all the berths around the port.
The port itself is enormous, like a great sprawling beast, with giant warehouses, cranes, and many berths for ships loading or unloading a huge variety of cargo including cars, fuel, food, recycling, plants and animals. Plus there is the Cruise Ship Terminal, with its ornate cupola, and with its beautiful listed wooden buildings, painted pastel blue like a post card beach hut but much, much, bigger! It provides a contrast between the commercial and industrial side of the port with this softer old building.

On our journey around, we stopp

ed in at the Tilbury Seafarers' Centre. The inside has recently been refurbished, and is bright and welcoming, with a small shop, bar, sofas and pool tables, karaoke, and a selection of free knitted hats to take away. There were computers and telephones available for seafarers to contact home, and one of the four chaplains is always in residence to offer support, along with other volunteers. The centre can now be used by seafarers 24 hours a day.

Then we were on to the most eagerly anticipated part of the day which was getting on to a ship and talking to the crew. This hadn't been guaranteed as ships come and go but we were lucky, as we were able to board two very different ships, RMS St Helena, and a container ship. 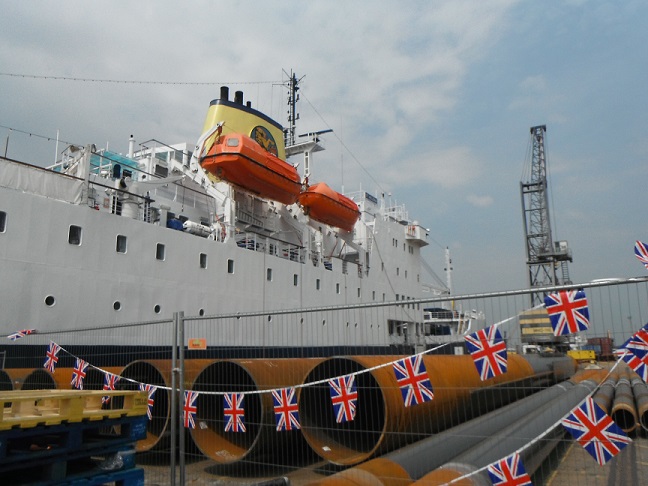 The RMS St Helena is one of only 3 ships left to carry the title RMS, and she was on her final visit to Britain before being decommissioned. A mixture of cargo and passenger ship she once provided the only outside contact and services to the island of St Helena. A new airport is opening and the future of the RMS St Helena is uncertain. The Captain, Andrew Greentree, had been on her over half his life and although the ship was preparing to depart in a few hours the Captain took time to show us round his pride and joy.
RMS St Helena was a glorious warren, combining passenger cabins, crew quarters, mess rooms, galley, storage facilities, container transport, a gym, a swimming pool and engine room in one great floating adventure. We were particularly taken with the fact that as part of their transported goods there is an ice cream room, a beer room, and a chocolate cupboard! The crew were all in smart uniform, white and navy, and everyone had a smile despite being busy preparing to sail.
There was something a little sad about knowing this was St Helena's last UK visit; that a chapter was going to close on an important piece of seafaring history.

Our second ship visit was to a container ship, this was a very different experience. The crew were Filipino, Ukrainian and Belarusian, and looked concerned as we boarded, presumably thinking we were official bodies come to inspect or criticize. Once we'd explained were we were from and our aims, they visibly relaxed, and we got a tour of the ship, although the Mate insisted on very thoroughly showing us the safety equipment, just in case!
The two seafarers on deck we spoke with both told us of long contracts, 9 months away from home, and short time in Ports- maybe 3 hours; of which most was unloading. They spoke of the fatigue caused by the 6 on 6 off shift pattern, and the lack of shore leave available. One said 'that even if we could go on shore, when the ship's unloaded we'd rather rest'. The other confirmed 'On container ships, we don't care about drink, we don't care about food, we only care about sleep'

The container ship felt very different from the Helena. It felt like another world, one where when we stood on the bridge, containers were flying past mere inches from the window on cranes, where everything from fruit to lorries was being transported. One of boiler suits and grease. No fusion of luxury here, just work, the smell of oil sweat and the metal walls of shipping containers on all sides.

From the bridge, the view across the port was incredible. The life and movement below was something to behold as ships sailed in and out, cranes swung containers around, the wind turbines turned and lorries and Straddle cranes danced an intricate dance on the dock side.

The Captain came to join us on the bridge. His story was familiar- once seafaring life was the best of lives, you saw new places, had several days in port, life had been more leisurely and he had loved Rio, New Zealand and the warmth of the Caribbean. Now it was different, in the brief time in port,mountains of paperwork claimed his time, his crew were always busy and had little time to rest. You were in port for only a short time and there was no time to go ashore to visit the cities or see the sights. 'Sailing in the 80's and 90's was a wonderful life, now it is much harder and is a less attractive career'. His eyes lit up again when we asked about life before, and he told us of his former adventures.
We headed back to shore, down the many, many flights of steps that had taken us to the bridge ('The worst thing' the Mate said 'Is being on watch and realising you've left something downstairs').

The crew we met had all said this was a good ship; some were on their second or third posting because its standards were high. It makes you realise, this is a container ship with good standards, and an understanding captain but the crew are still tired and some are homesick. What must life be like on a ship with poor standards, or a harsh Captain?

After a rest for lunch, our minds full of the sights we'd seen and the conversations we'd had, we were driven back to the station. Halfway out of the port, we stopped to watch the St Helena depart on her last voyage up the Thames to moor next to HMS Belfast. Snub nosed tugs, small but powerful, gently pulled her free of the dock. She swept majestically past on her way to a few days of celebrations and celebrities in London before returning to South Africa for her final few months' work in the South Atlantic. We wished her and all those on board a safe journey.

We'd like to thank everyone for a really great day especially those who welcomed us on board and particularly Geoff and Tim for the time and effort they put into making this port visit such a success.