Naham 3 seafarers – after the homecoming

Saturday October 22, 2016 – the date of release for the 26 hostages of the Naham 3, who had been captured by pirates four and a half years ago. Many of the seafarers had not seen their families for five years, and three of the original captives had died, one killed by pirates, the other two from disease. The inhuman actions of a pirate gang has robbed these men of years of productive time and deprived their families of much needed salaries. As they were mostly from poor backgrounds in poor countries, there was little hope of a huge ransom being raised and they were consigned to years of malnutrition and worry, in a futile exercise in money-making by criminals in Somalia. But what happens now they are home? What are their circumstances?

Roger Harris, Executive Director of ISWAN, explained: “The seafarers have not been paid since the fishing vessel was captured. As is sometimes the case, the company did not meet the huge ransom demand made initially, nor did salaries continue for the time spent in captivity. This forced the families to find support in other ways, through relatives, by finding other work, or grants from charities like MPHRP.”

Chirag Bahri of MPHRP in India, himself a former hostage and a seafarer, who has worked with hostages and their families in South Asia for four years, said: “when seafarers first come home after such a long absence, they may face many hurdles on adjusting to every-day life and to relations with their own family members. Their mental and physical health issues will be the concern for everyone around them. The seafarers will be worried as they are not paid and supported by their company and their uncertain financial circumstances cause stress. The seafarers will need love, care and respect from their family, friends, their government and the overall support of the whole community so that they get reintegrated within society. Eventually we hope that with proper rehabilitation plans, the seafarers will come out from the trauma and lead a normal, dignified life. They are our true heroes as they have now become more mature, resilient and strong, and through their experiences understand different aspects of life.”

Jun Pablo of ISWAN / MPHPR Philippines, who has worked with the families of the Naham 3 hostages and supported them for years, said: “Every seafarer is different, and the reaction to the time of being a hostage is different. These men have been away for so long, their children have grown up and their parents have become old. I have met with all the seafarers now, I keep in touch by phone, and I have accompanied one of them back to his home in the provinces. The cases of piracy we have dealt with tell us that after the homecoming they need time to make an adjustment from their day-to-day life in Somalia to their new reality, for example going from one meal a day to three, and having freedom to move around. Within the Philippines, the major concern will be how to earn money to support their families. Some former hostages before have gone back to sea still suffering from PTSD, and while some manage to keep going others cannot cope and have to come home. As yet, since the seafarers have returned, the families have not felt the pressure of financial need, they are in a period of happiness and excitement. After a month or two we will be able to see the economic condition and how this condition affects the seafarer and how they manage to cope. So far, one of the seafarers has said he will not go anymore on board, but will stay in the province and look for alternative work. Another wants some time to rest at home, and says he will be willing to go back to sea in 2017. Another seafarer suffers from bad dreams and is sleeping badly. The emotional upheaval of getting home is a huge adjustment.”

Apinya Tajit works for the Apostleship of the Sea in Thailand and is a welfare responder for ISWAN / MPHRP. She has helped with the welcoming in 2015 of some of the Thai hostages who had spent more than 5 years in captivity from the Prantalay 12, and she has assisted Caritas Cambodia with the welcome for the Cambodian hostages of the Naham 3. Their story starts with a recruiting agent coming to the village to ask families if they have sons to send abroad to work. Initially they were told they did not need to pay anything, and then they were given a contract for USD 150 per month for a 3 year contract and told to pay USD 300 for expenses. Since their capture, they have not received any money. Apinya said: “Before I met the men I was concerned about their health, and the psychological scars of such a lengthy time in captivity. We provided medical checks and counselling within the first two days while they were with their families to help them release the psychological pain, and to feel the comfort that someone cares for them. One man was shot by a pirate in the leg because he cooked the food for the group too slowly, and he cannot walk properly yet. When he returned home his mother, brother and sister were there, but his wife had left him for another man. Another survivor, when he met his wife and family, kept his emotions buried and acted like a stranger. We could not immediately find the family of another of the survivors, though we have found them now. He felt terrible when he returned - he had been treated like an animal, had no hope of ever returning home, and survived by trapping birds, wild cats and even rats, anything to outwit his captors and survive. The pirates always told them to eat, and assured them that they would go home that week, but this only happened after 1,672 days. The families, and their villages, were overjoyed to have them back. However, I cannot say that everything is going to be easy for them from now on. For the men I am concerned about how they adjust to life after this nightmare, and for the families I am concerned about them getting their loved ones back with scars, feeling like strangers to each other, and different from when they left home. Eventually I hope that time and our programme can help to heal everything, and I am planning for their future support by ISWAN and Caritas.” 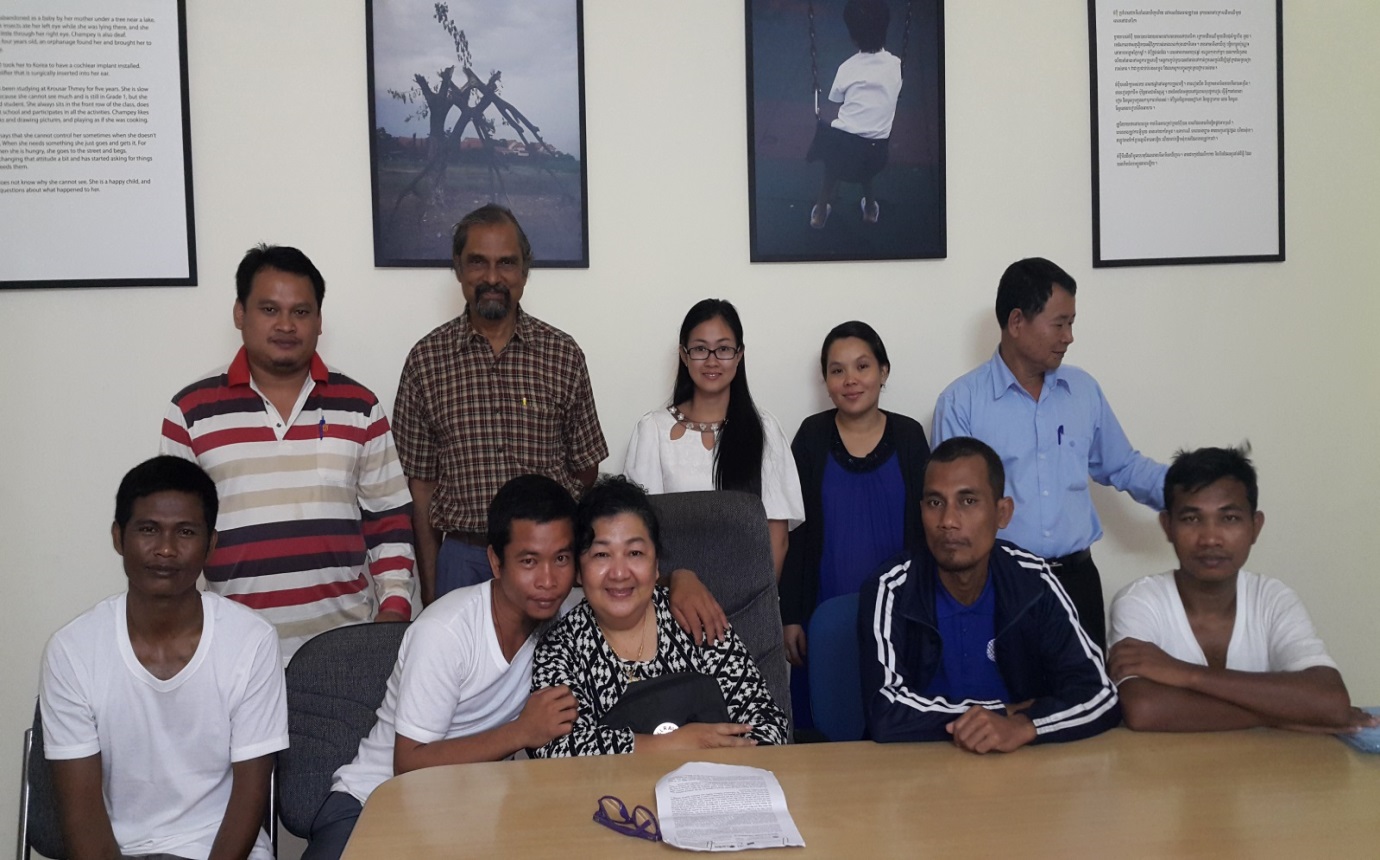 The four Cambodian seafarers in the front row, with Apinya Tajit centre front, and the counselling team behind

Capt Nguyen Viet Anh, a welfare responder for ISWAN / MPHRP, arranged the welcome for the Vietnamese hostages of Naham 3. "Prior to the repatriation of the released hostages, I was ready to welcome three weak, sick and disappointed men who would need a long period to be integrated into the community. The families also thought likewise. However, upon their arrival at the airport, the seafarers expressed themselves as reasonable and rational, full of common sense and able to act and speak normally after a terrible experience. The result of the seafarers medical examinations showed they were in normal conditions of health, and this was very good news. But when I visited them again on 4 November in their homes, I found a number of signs showing that our seafarers are under certain pressures and are feeling quite exhausted, mentally and physically. One of them is speaking much less, and his memory is not good. He has become less active and he sleeps little. Another seafarer has also become much quieter, feels ashamed of his situation, and suffers from nightmares. The families are deeply concerned about the present health situation of their loved ones. Obviously, the piracy survivors need rest and will need post-release assistance to face the trauma of the past." 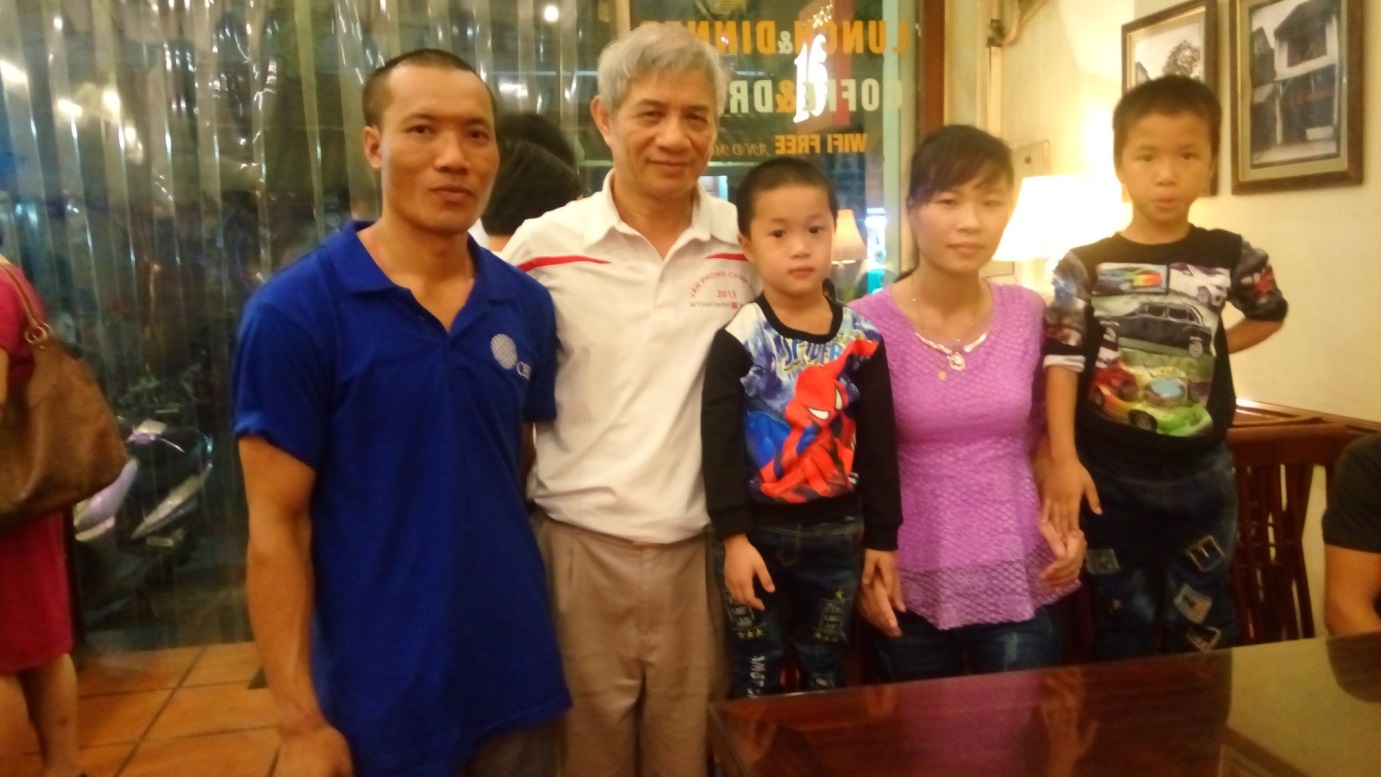 Tom Holmer, Programme Manager for MPHRP, added: “These brave men have gone through a life-changing experience. Research from Oceans Beyond Piracy in 2016 indicated that 26% of those attacked by pirates will have symptoms of PTSD, and that being held as a hostage for a significant period greatly increases the risk of PTSD. The research also showed that a large minority of family members of hostages show lasting behavioural effects from the experience. We know that they will react differently, and we need to be ready to provide what is needed for them looking ahead for the next six to twelve months. We are very grateful to the members of the Contact Group on Piracy off the Coast of Somalia, who have provided funds which have already been used to support families and the hostages themselves during their return, and we will need to do more for them on a case by case basis.”