Ngem Sosan of Naham 3 returns to a better house

Four Cambodian seafarers were among the crew of the Naham3, which was captured by Somali pirates off Seychelles in March 2012. They have been released from captivity on 22 October 2016, and will be back in Cambodia reunited with their families very soon. The story below was written about the family of one of the men while they were still in captivity, and can now be published.

Mr. Ngem Soksan lived in Dokpor village in Kampong Chnang province. He went to work as a seafarer in 2010, to support his wife and small daughter. Arriving in Japan in October 2010, Mr Soksan rang his wife to let her know he had arrived safely and was intending to become a fi

sherman. In November in another call, he let his wife know that he was finding life extremely difficult. After this, his phone was cut off.

Later in November 2012 she received the call to inform her he had been captured by pirates. He was highly distressed, being held hostage in a forest with pirates. He said: ' I live like in hell, maybe I don't survive to go back to Cambodia at all so, don't wait for me...' Then she received no further news.

Left without their husband and father, on top of their distress his family had little money to survive. Without an income or land to cultivate, their living situation worsened each day. "I and my daughter are still alive through selling my labor wage for a daily life" Sopheap added. Left with no choice, after 6 months of poverty she had to remove her daughter from school to become a garment worker. Sopheak is 12, and is 2 years behind in her education as a result. She had only 2 school uniforms and no books or study materials.

Sopheap asked her brother to build a small living area on his land. Her and her daughter lived in a small cottage made from bamboo and palm leaf. The walls of the cottage were fragile and offered no privacy. There was no clean water, and no electricity. At night time they used lamps and petrol. The house was not safe. When it rained the house was damp, and it was often very cold at night. They lived on $80 a month, using it for rice and basic food, transport and medicine. Sometimes they could only afford sweetened rice for lunch. 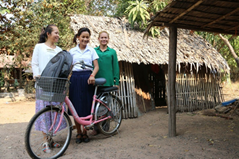 The new house is 4m wide and 7m long and completely built from cement (wall and the ground floor) and the roof is covered with the zinc-iron. In the house, there are separate bedrooms and living spaces. A bicycle, school uniforms, shoes, bag, writing books and study materials have been provided to support to Sopheak. Sopheak was very excited; she can now get to school on time and has no need to walk or borrow a bicycle from neighbours, and has 2 good clean uniforms to wear, as well as enough study materials for the whole year.

Sopheap and Sopheak celebrated their new house on 14 July 2016. During the celebration they invited the commune leader, village leader and neighbours. After a blessing from the Buddhist Monk the celebrations began.

Commune leader and village leader, would like to express their feelings and thanks to Mrs. Apinya, ISWAN, PSFF and Caritas Cambodia that helped this vulnerable family to have proper shelter and the opportunity for study.

Kong Sopheap 41 years old, wife and Tom Sopheak, daughter, speaking in July 2014 before the release of their Ngem:

We are feeling very excited to hearing that my husband still alive. We don't know how to express our feeling besides of raise our hand up and seeking your understanding and please help and release him to be back home in order to live with us with peace and harmonization. Because we are really poor we don't have anything to give back to all of you at all.

I and my daughter were living far away from my husband for so long, we feel missed him so much. We really need him to be back home to complete our family's life and give us warm, give us shadow, taking a good care for us and supporting us. Especially my daughter she is so young and strongly need the care from parents mainly father, also she needs to continue to study too.

Brothers and sisters, please help to lobby the pirates and help to release my husband. I do hope that my husband can come home very soon.
I and my daughter really deep thanks to everybody that have help us a lot, your helping not only house and materials but you all make me feel warm, give us hope and proud for the future life. We pray for you all to have good health, success in your duty and please kindly help my husband to come back home safely soon. We will never forget everything you help but we will take a good care of this house and waiting for my husband and father to come and living as a family all together. 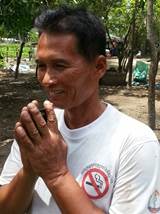 My name is San Sothorn, I am older brother of Ngem but we have different mother.

I always thought that my youngest brother was passed away since 2012, because he called us he has no chance to be back to Cambodia while the pirates arrested him. But now I feel so excited to hear that he still alive.

I beg to the pirate please soon allow my brother to come home and please all of you who come here helping him to reunite his family. House he was living with family, right now no person to stay in but we still keep it and waiting him to come for reunites the family.