On 9th February 2016, nine seafarers being held in Nigeria were released.

The ship 'Melilli', also known as 'Asteris', was arrested in March 2015 in Nigeria on charges of illegal oil trading. Some of the seafarers were imprisoned, and others left on board the ship at anchorage under armed guard. The owner and agent were not in contact with the crew and did not provide supplies to the vessel.

The Seafarers' Emergency Fund, administered by ISWAN, provided funding for two separate deliveries of food and water to the crew left on board, in September and November 2015. In total, the Fund provided USD 7,500 for food, water and medical supplies.

Amos Kuje, Secretary of the NSWB, said: "We were grateful for the help of the Nigerian Navy, who worked with NIMASA and with members of the Bangladesh community in Lagos to assist the seafarers. They have also helped some of the seafarers from this ship who have remained in prison, and we want to thank all who have helped to achieve this outcome in the face of very difficult circumstances."

Various organisations came together to provide assistance, eventually leading to the seafarers' release. On 9th February came news of the release of nine of the seafarers from the ship (four from Ghana, four from Benin and one from Bangladesh). Three Philippino seafarers had already been repatriated the previous week. Below is a photo of the National Seafarers' Welfare Board of Nigeria (NSWB), members of ISWAN, assisting these seafarers with transport. The NSWB also runs a drop in centre in Apapa. 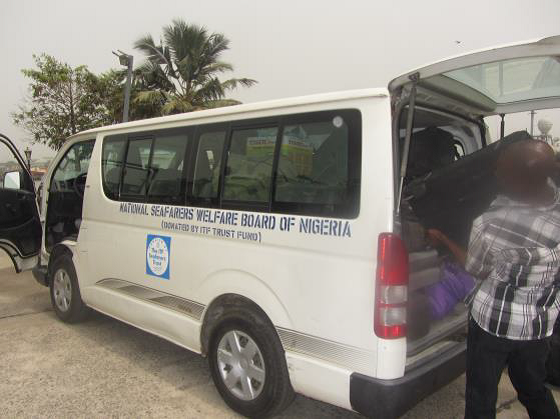