Amit * contacted SeafarerHelp to say that six months prior, the vessel which his brother was working on had sunk. The crew had been rescued by the local Port Authority and their P&I club had placed them in a hotel. The ship owner showed no sign of helping to repatriate the seafarers. It was then discovered that the ship had been carrying illegal weapons and the crew were put in prison.

Amit was very worried about his brother. The crew and their family had been in touch with their embassy, who had suggested the seafarers would be released soon, however they were becoming increasingly distressed as nothing had happened for six months.

A SeafarerHelp Officer contacted two ITF representatives in the country who established that the crew had been arrested because the ship had been carrying arms. The ITF sent a letter to the judge on the case, who had attempted to summon the ship owner. The seafarers were later released and told they would be repatriated because the tribunal had rejected the theory of illegal arms trafficking. The crew's release had been negotiated until the Magistrate could decide how to proceed in the ship owner’s absence. The seafarers stayed in their embassy’s guest house instead of prison, which was a much safer environment. They were repatriated soon after, and Amit and his brother were finally reunited.

Finn* contacted SeafarerHelp concerning his wife, Laila*, who was travelling with him on board. The ship had docked in Russia, and Laila had been issued a fine of USD 51 for not possessing a Russian visa. The seafarers sailing on the ship were all in possession of a seamen’s book and so did not need visas. The ship had docked in Russia for less than 24 hours and Laila had not gone ashore at all.

Finn contacted us as he was concerned that as the crew would be returning to Russia multiple times, his wife would receive increasingly large fines on each visit. He was even more concerned about the possibility that Laila could be imprisoned. He had been informed that returning to Russia for a third time without a visa could result in imprisonment or being barred from the country.

Our Russian speakers contacted the Russian visa application helpline asking whether Laila would be exempt under this specific set of circumstances. They confirmed that the seafarer’s wife required a multiple entry tourist visa. The SeafarerHelp team managed to set the seafarer’s mind at rest and to advise him on the course of action to take. Laila disembarked in a port in Europe and applied for the visa there. She later returned to the ship with the necessary paperwork which meant that she and her husband could continue to sail together without worry.

Ambrose* contacted us when on the fourth day of hunger strike. He hadn’t been paid and was refusing food until he received his wages.

A SeafarerHelp Officer spoke to Ambrose in his native language and ascertained the detail of the situation. He had completed his contract some months ago, but had refused to leave the ship until his wages were paid; he had been assigned a cabin in the base of the ship and was told to have no contact with the rest of the crew.

The SeafarerHelp team contacted the ITF inspector in his next port and encouraged Ambrose to return home and follow up the case from there with the local ITF inspector, stressing that continuing the strike would be dangerous for his health. The SeafarerHelp team continued to facilitate contact between the ITF, Ambrose and his family, as he did not have the funds to make phone calls himself. The ITF received a letter saying Ambrose’s wages would be paid. Ambrose was worried that it was a ruse, so he contacted his brother who checked his bank account for the transaction. Upon finding that he had received some wages he ended his hunger strike and returned home. He remained in contact with the SeafarerHelp team and the ITF until he received the rest of the money.

After he had returned home, Ambrose rang our helpline team. He thanked us for all of our assistance and said he would not have made it through all this without our help. Often seafarers find the emotional support to be the most vital part of our services. Our team is always here to offer both practical and emotional support to any seafarer in need, and we are happy to have supported Ambrose in this difficult time.

If you are a seafarer in distress, or a family member needing support, contact our team at www.seafarerhelp.org 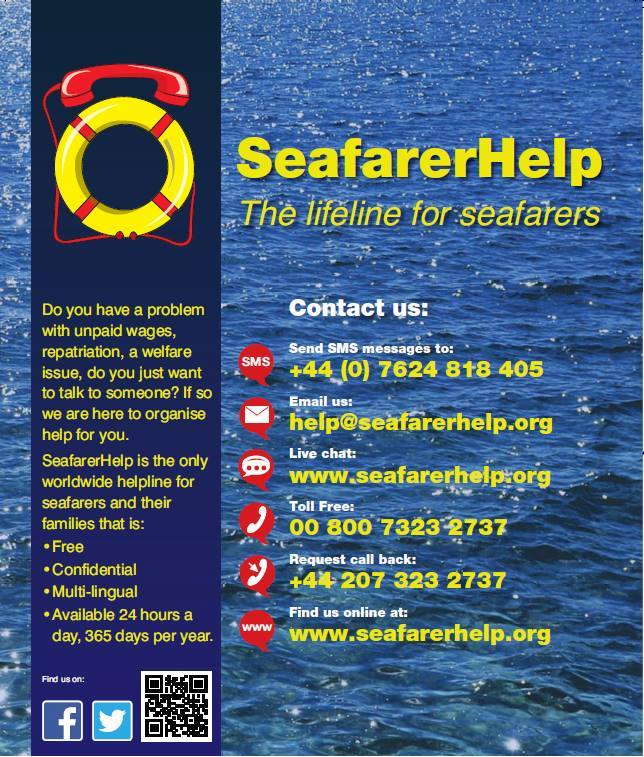