We were delighted to interview Ankita Srivastava, a former seafarer of 11 years and India’s first female Chief Engineer who sailed on foreign going ships. Ankita, originally from Lucknow in India, currently works for Teekay in their London office as a Voyage Manager in Commercial Operations. She looks back on her time at sea favourably and offers future seafarers constructive advice about learning from difficult situations.

What inspired you to go to sea?

I had a great desire to do something different. No one I knew had worked in the industry before but I came across Marine Engineering while investigating the field of Engineering. I was immediately interested because I thought it was unique and unheard of – that’s what attracted me to it the most. It sounded so exciting!

What advice would you give a woman about to start life as a seafarer?

I would tell any seafarer, male or female, to embrace life at sea. Enjoy every moment you can. There will be hard times; try to learn from them and move on. If you feel sad, talk about it. If you feel low, share it with others. There needs to be a strong culture within a company that encourages excellent communication at all levels – both on board and ashore. I was lucky to have this working for Chevron, and to sail with seafarers of many different cultures. I had never stepped out of India before joining my first ship, but I soon learned to respect different cultures and views. The more senior I became, the more I tried to help others on board when they struggled. Support on board is vital and if you work for a good company, your crew become like family.

Is there any advice you’d offer women who experience discrimination on board?

Speak up. Companies should have mechanisms in place for seafarers to report discrimination or harassment. It can be very daunting to raise these issues because of concerns you won’t be supported, but if you can’t speak to anyone on the ship, then speak to someone in office. Discrimination of women seafarers will continue until more women challenge it when they experience it. It’s the same on land.

What do you feel was your biggest achievement at sea?

It was probably becoming India’s first female Chief Engineer sailing on foreign going ships. At the time I didn’t see the point of self-promotion or drawing attention to this. I felt so privileged to be doing what I loved that I saw this more as a bonus than achievement. I now feel that it’s good to talk about it to try to inspire other women in the industry to follow their dreams and fulfil their potential.

Were there any other proud moments during your time as a seafarer that you’d like to talk about?

I did receive an award from DG Shipping of India for being the youngest person to pass Class 4 Engineering in 2005. My parents always taught me to be a good person first and take everything – such as this award – as a blessing.

Did you experience any challenges during your training?

I’d say mind-set was difficult. Across 4 year groups during my time at college there were a total of over 350 male students and just 7 female students. That was quite daunting and made me nervous but the training we got in the college prepared us for the life ahead.

What about challenges at sea?

Every day was different and routines were not possible which was also a real positive because it meant it was never boring, but it could still be difficult. You meet a variety of people too, some encouraging, some not so. Whenever I experienced negativity it lit a fire in me to prove myself even more – I always challenged people who would doubt my skills. I would ask 'Think about my work. In what way could a man have done better?' It is still a case today that women have to work that bit harder than men. On the ship they’re constantly under scrutiny. Her every move is known. If a woman sneezes, I assure you the whole crew knows about it. However, the great thing about the word 'seafarer' is that it’s not gendered. It focuses on a profession rather than the gender of the person carrying out the job. It reinforces the fact that anyone – man or woman – can do this job. People have to consider it as another job and not make it a gender biased role.

What do you miss most about life at sea?

Everything, it’s my second home! The sea, the engine room, the smell, the work, dinner time with ship mates! There’s nothing that I don’t miss. After achieving Chief Engineer position I wanted to continue to build on my experience. I wanted to learn and explore the industry and see things from another perspective. Shipping is so vast but there is so little known to people and I wanted to learn more about the industry. I also felt that the industry had given me so much and I wanted to give back. There’s still so much left for me to achieve in the future.

Is there anything else you’d like to say about life as a seafarer?

It’s a challenging job, both physically and mentally, but it’s important to always be yourself and go with your gut. You may not see your family for months on end so it’s vital you connect with your crew on board. Take the first step if you need to and your crew can become like family. 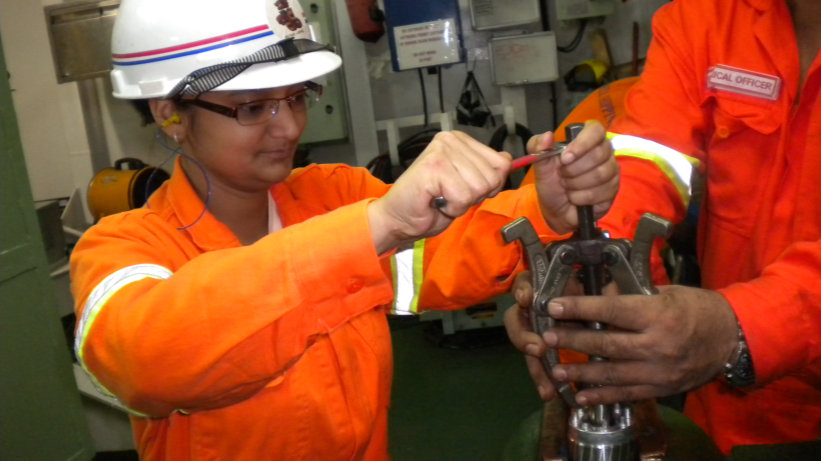