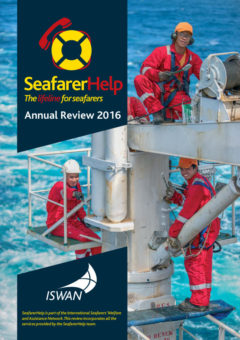 In the face of tough shipping markets and dogged by mental and physical health concerns, worries about pay, careers and abandonment, more seafarers than ever before have been turning to SeafarerHelp for assistance and support.

According to the newly released 2016 annual report from the free, confidential, multilingual helpline for seafarers and their families, there are serious problems facing those at sea, and seafarers desperately need help.

The annual report looks back on a tough year, as vessel over-capacity hit freight rates, bringing with it severe uncertainty across many markets. Once again, it was seafarers who bore the brunt of change, cuts and confusion. The SeafarerHelp report shows how the industry was left wrestling with a number of problems, which delivered serious knock on effects for people working at sea.

The helpline, part of the International Seafarers' Welfare and Assistance Network (ISWAN), saw a record number of contacts from seafarers, and in a year which saw major shipping companies fall bankrupt, crews, customers and the logistics chain were left in disarray. It was clear that seafarers needed somewhere to turn to for advice, guidance, support and a place to be heard.

In 2016, SeafarerHelp dealt with 3,073 new cases, involving 11,228 seafarers and their families. In addition, the helpline received a further 4,548 successive contacts and dealt with 4,073 different issues raised by seafarers, while the free service helped seafarers of 99 different nationalities making contact from 122 different countries.

Writing in his introduction to the report, Per Gullestrup, Chairman of ISWAN, says, “The ISWAN SeafarerHelp team played an important role in raising awareness about social isolation and mental health issues among seafarers. In 2016 we have continued in this vein and have seen our emotional support service develop and mature”.

SeafarerHelp is often the first port of call for seafarers when they need help, and as such the helpline is uniquely placed when it comes to gathering contemporary data and for spotting trends affecting seafarers. The latest report stresses that issues of social isolation and mental health continue to be key concerns, as do welfare issues and the problems of bullying, harassment and abuse.

According to Roger Harris, Executive Director of ISWAN, “While reaching out to SeafarerHelp is the first port of call when crews face problems, they also turn to the service as a last resort, and in desperation. Working with partner organisations we do everything possible to help”.

While issues such as mental health are receiving more attention, other issues stubbornly remain. Threats posed by piracy and robbery, as well as the abandonment of seafarers, continue to take their toll on those working at sea.The issue of owners abandoning their responsibilities and their vessels, leaving crews to sit on ships as water, food and fuel run out, was often reported by seafarers to the helpline.

Amendments to the Maritime Labour Convention (MLC) now mean that insurers and flag states are involved in repatriating crews, that is positive, but the problem has not gone away. On the contrary, problems are frequently reported to SeafarerHelp and the organisation is supporting crews of a number of vessels in various locations around the world.

The data and intelligence generated by SeafarerHelp serves as a bellwether for the changes which are over the horizon for shipping. There are still many problems and concerns and action needed to head them off.

ISWAN is keen to leverage that insight, and ensure that while seafarer anonymity, safety and welfare remains paramount, that the insight from seafarers informs the industry response to the problem areas and issues which impact so heavily on the quality of life and working in the merchant navy today.

The report is being distributed to key decision makers across the shipping industry, as well as to the funding bodies and organisations which fund this vital resource for seafarers.

Roger Harris says, “SeafarerHelp is free to all seafarers and their families wherever they are in the world thanks to the continuing support of funders, The TK Foundation, the International Transport Workers’ Federation (ITF) Seafarers' Trust, Seafarers UK, and Trinity House. We are incredibly grateful for this support, and we see the difference it makes to seafarers”.