The results of new research into the welfare needs of superyacht crew were announced on Monday at a seminar held at Inmarsat’s headquarters in London.

We partnered with MHG Insurance Brokers to conduct a survey of seafarers who work on superyachts to investigate welfare issues specific to the sector, backed up by in-depth interviews and diary studies. Based on responses from 402 superyacht crew responding to the 50-question survey, the report finds:

Yachting offers wonderful opportunities and this side was revealed in the report in quotes including: ‘Yachting delivers beautiful adventures to remote parts of the world…at a fraction of a cost that any other occupation can offer.’ It is also a hard life physically: ‘…you work bloody long hours without a day off in weeks during charters.’ The report covers the very good side of working on superyachts, without shying away from areas where improvements can be made: ‘I know a lot of yachts look after their crew but a lot don’t.’

The recommendations of the report include the following:

Rob Myers – Senior Director, Large Yacht and Passenger at Inmarsat, the seminar host – opened the launch in London by introducing Inmarsat’s recent work on improving superyacht crew communications. Dr. Olivia Swift, who conducted the research for ISWAN, presented the results to delegates and a panel then addressed three key discussion points stemming from the report: gender, religion and leadership. The panel members were:

Commenting on the report, MHG Insurance Brokers’ Chairman and CEO Andrew Dudzinski said: ‘How can we expect to recruit and retain loyal crew tomorrow if we don’t understand their welfare concerns today?’

The research was described by seminar delegates as ‘long overdue’ (Dùghall macLachlainn, a superyacht captain), at the ‘forefront of development of crew welfare’ (yacht recruitment agency wilsonhalligan), and ‘a step in the right direction for the future of superyachting in a modern world’ (Sara Ballinger, Crew-Glue).

ISWAN’s Executive Director Roger Harris said: ‘The research highlights some real concerns of crew working on superyachts that need to be addressed by the sector. We are grateful to MHG Insurance Brokers for funding the research and to The Mission to Seafarers for supporting it.’

Andrew Wright, Secretary General at The Mission to Seafarers, said: ‘I was absolutely delighted to attend the excellent superyacht seminar. The findings of the study confirm my own experience of the industry and were properly thought-provoking. This is an area of need which has been insufficiently on the radar of most maritime welfare organisations. At The Mission to Seafarers we are determined to take forward current discussions. Working with partners, we are looking to develop appropriate kinds of support, focused on identified areas of need and using our particular skills and experience.’

Dr. Olivia Swift said: 'Rather than the culmination of a project. the ISWAN report was intended to launch a collective effort towards realistic improvements for superyacht crew. The energy and ideas emerging at the discussion event, from a wide-range of key stakeholders, show the appetite and capacity for realising change that will make a real difference to the men and women working in this demanding - and enormously rewarding - industry.'

The report can be downloaded below. 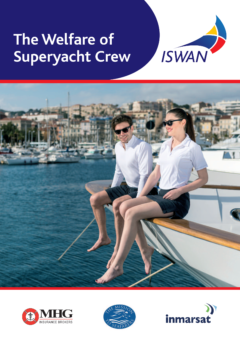 The Welfare of Superyacht Crew

We partnered with MHG Insurance Brokers to survey seafarers who work on superyachts to investigate welfare issues specific to the sector.