ISWAN looks back on an extraordinary year for seafarers

With calls and messages to its 24-hour helplines more than tripling last year as a direct result of the COVID-19 pandemic, the International Seafarers’ Welfare and Assistance Network (ISWAN) has had a unique insight into the challenges faced by seafarers around the world.

ISWAN’s helpline team handled over 20,000 calls and messages from seafarers and their families seeking help and support between April 2020 and March 2021. The organisation’s 2020-21 Annual Review, released today, highlights some of the key issues seafarers have faced and how ISWAN has been able to help.

Almost a quarter of the cases handled by ISWAN over this period involved financial or debt problems as seafarers the world over found themselves unable to secure work at sea and families struggled to make ends meet. In response to this crisis, through relief funds administered by ISWAN more than US $272,000 in grants were awarded to those in desperate need.

Another particularly common issue was repatriation, as many seafarers and maritime students found themselves stranded abroad due to travel restrictions. With the help of ISWAN’s team in India, over 1,800 seafarers were safely returned home. In the Philippines, around 2,000 crew members left stranded in Manila, unable to get home due to the national lockdown, received daily deliveries of food from ISWAN’s regional team.

ISWAN’s helplines, which include SeafarerHelp and Yacht Crew Help, received twice the usual number of calls and messages relating to suicides or suicidal thoughts in 2020-21, highlighting the significant mental stress seafarers have been under and the need for increased mental health support in the industry.

In its wider work, ISWAN has delivered 75 Maritime Mental Health Awareness Training sessions to senior officers, shoreside staff, ratings, and those interested in becoming Mental Wellbeing Champions. The training seeks to equip participants with the necessary skills and confidence to recognise the early signs of mental health problems and to initially respond to concerns arising on board. ISWAN has also been trialling social engagement initiatives with a number of shipping companies as part of its Social Interaction Matters (SIM) project, which is due to enter its third phase soon.

‘In a year dominated by the pandemic, ISWAN adapted well to the new working environment and enthusiastically stepped up to meet the increased demands on its services from seafarers as they struggled with their own challenges. However, none of this has been achieved alone. ISWAN is enormously grateful for the sustained commitment of its funders who have enabled our work to continue, and our colleagues in the other maritime welfare organisations that have collaborated so effectively with us. The pandemic has yet to run its course and seafarers are still being asked to go above and beyond the call of duty, so ISWAN will do the same – supporting them in the best way we can.’

ISWAN’s 2020-21 Annual Review can be downloaded below. 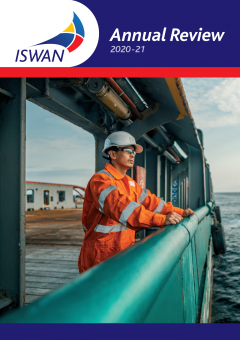 We look back over the financial year 1 April 2020 to 31 March 2021, a year dominated by the pandemic when seafarers needed help and support more than ever.