On Wednesday 16th November, ISWAN held its first in-person annual seminar since 2019, welcoming guests from the global maritime industry to Rotterdam for a day themed around the importance of social interaction for seafarers’ wellbeing.

ISWAN’s 2022 Seminar highlighted learnings from ISWAN’s most recent Social Interaction Matters (SIM) Project research and investigated how to further develop and effectively implement the project’s guidance and recommendations for the future – in ways that are inclusive for other areas of the maritime sector, including cruise ships and superyachts. Expert speakers also contributed insights from their industries and sectors to inspire and enrich discussions.

René de Vries, Harbour Master of Rotterdam and Chairman of the Rotterdam Port Welfare Committee, opened the seminar with a few words stressing the importance of social interaction and seafarers’ welfare. Capt. Yasser Hashem, Director of Fleet Personnel at Bahri Ship Management, gave a message on behalf of the event’s Gold Sponsor, outlining the alignment between ISWAN’s vision to improve the lives of seafarers with Bahri’s company values.

The seminar’s first speaker, Consultant Clinical Psychologist Dr. Pennie Blackburn with whom ISWAN has worked for many years, highlighted some key dates in ISWAN’s and the wider industry’s understanding of seafarers' mental health and listed the key determinants of mental health issues among seafarers, including a non-caring company culture, violence at work, and low job satisfaction due to the individual’s lack of control over their work. Dr. Blackburn outlined some of the key guidance and recommendations in ISWAN’s Mentally Healthy Ships, which is founded on the principle that seafarer wellbeing is a shared responsibility between the company and individual. It highlights that good practice in mental health policy involves defining a vision for mental health and wellbeing and establishing key organisational objectives.

Dr. Mhairi Bowe, Assistant Professor in the Department of Psychology at Heriot-Watt University, Edinburgh, stressed that we need to look beyond social interaction if we want to improve the health and wellbeing of seafarers. She argued that social interaction alone is not enough – we need to look towards social connection that is relevant and psychologically rewarding. Dr. Bowe introduced the ‘social cure’ theory, which focuses on how a person’s social relationships, social networks and social support contribute to their health and wellbeing. Group identification is an important element: people who see themselves as part of the group (or organisation) are more likely to cooperate and help one another, which reduces stress.

Seminar delegates were offered an insight into the Royal Navy’s approach to health and wellbeing by Surgeon Commodore Fleur Marshall, Head of the Royal Navy Medical Service, who explained that health and wellbeing is understood as encompassing culture, environment and, crucially, leadership. Team cohesion and the leadership chain are fundamental in supporting individuals and their mental health in the Royal Navy, and it provides a Divisional System which gives all members of the crew a superior rating or officer to whom they can turn for support, guidance and signposting. Social interaction plays an enormous role in building ethos and camaraderie among the ship’s company, and Royal Navy ships have a range of sporting and entertainment activities and access to funds from armed forces charities to buy equipment.

Next, Julie Carlton, Seafarer Safety and Health Manager of Seafarer Services at the Maritime and Coastguard Agency (MCA), introduced ISWAN’s Social Interaction Matters (SIM) Project, which was funded by the MCA due to a clear lack of focus in existing research on the ship as a social environment. Dr. Kate Pike, the SIM Project Research Lead and Associate Professor at Solent University, followed with an overview of the project and its phase one and two methodologies and key findings. These included the role that social interaction plays in promoting a stronger safety culture through building trust and familiarity and the capacity to recognise one another’s strengths and weaknesses. Dr. Pike emphasised the importance of visible, empathetic leadership, ongoing leadership training and good people skills in encouraging crew to participate in social events and relax and enjoy themselves onboard. She introduced some of the key guidance from the phase two trials including five key activity themes that can provide the basis for positive social interaction: sports; food and drinks; other entertainment; technology; and relaxing and calming. She also outlined some of the SIM Project’s key recommendations (which can be downloaded at the end of this article), including the role and responsibilities of the Social Ambassador, and detailed future plans to promote, develop and evaluate the project. These include an evaluation phase, regular development of the project’s guidance and stakeholder engagement.

In the afternoon, ISWAN held a panel discussion on how the sector can implement the SIM Project guidance and recommendations from a practical point of view. This was hosted by Jason Zuidema, Executive Director of NAMMA and General Secretary of ICMA, with panel members: Capt. Akshay Rai of Executive Ship Management (standing in for Captain Steve Oertel, Master at MF Shipping Group and SIM Sea Ambassador); Charles Boyle, Director of Legal Services at Nautilus International; Karen Passman, Founder and Owner of Impact Crew; and Karin Orsel, CEO of MF Shipping Group and ISWAN Trustee. The panel discussed the one of the SIM Project’s key recommendations – the role of a voluntary Social Ambassador on board every vessel to help crew engage in social activities – emphasising that the role should be empowered with resources and encouragement from the company, and that social interaction should be inclusive but not compulsory or feel like ‘forced fun’. The panel also addressed the key role of of positive leadership in implementing social interaction initiatives on board, and the importance of managing fatigue and adhering to the legal framework on hours of work to ensure crew receive good leisure time. Capt. Rai stressed that intent is the most important thing – commitment to social interaction, along with the same sense of urgency that there is for commercial or safety matters, is needed. The importance of crew welfare, social interaction and mental health needs to be passed on to crews.

The seminar concluded with a workshop where delegates divided into groups to discuss three different questions relating to the SIM Project guidance and how to overcome any barriers to its implementation. Enthusiastic table hosts from the industry were a huge support in encouraging discussion and feeding back on the ideas generated. ISWAN intends the SIM Project to progress as a collaborative effort so the ideas from the seminar workshop will be fed back into the plans for future project phases.

ISWAN would like to thank all guests who attended the ISWAN 2022 Seminar in person and via the live stream, all the speakers and panellists who brought this year’s seminar to life, the hosts Stichting Welzijn Zeevarenden Rotterdam, and all of this year’s sponsors: gold sponsor Bahri; silver sponsors the UK Merchant Navy Welfare Board, Nautilus International and Standard Club; and bronze sponsors AMOSUP, KVH, Mayfair We Care, Scorpio Group and Seapeak.

An in-depth look at insights from the seminar written by Dr. Kate Pike will be published next month. 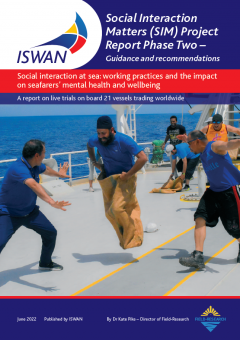